Since the 1990s, we have witnessed a vertical growth of the real estate industry in Pakistan. Attracted by higher returns and increasing factors contributing to higher ROIs, a lot of investors and developers have been investing in the property market of Pakistan for a long time, especially over the past decade.

Here is a recap of how the year 2018 turned out to be for our country’s real estate sector.

2018 remained the year of changes, be it the changes in government or changes in policies by bodies governing the property market of Pakistan. However, in the midst of all this, a memorable event was organized by Zameen.com in Dubai which will also be discussed further. First, let’s talk about the restrictions that the government put on the non-filers.

It was a decision taken by the state and a lot of people were not expecting it that way but it somehow barred non-filers from doing property investment worth over PKR 4 million in Pakistan. However, this decision was taken in the first quarter of 2018 by the previous government and when the new government came into power after the election, it eventually made a few necessary amendments to ease up some strict regulations. It was done to provide relief to people who had low income and also for those housewives and daughters who have inherited properties from their husbands and fathers, respectively.

The Federal Board of Revenue (FBR) sprang into action and formed a Directorate General Immovable Properties after reports of real estate mafia and increasing fraudulence emerged. This body set up by the FBR has the mandate and responsibility to conduct research, market survey and come up with analysis based on their findings. It was purposed to create a link and spread synchronized awareness across all the related institutions such as revenue and excise authorities regarding the property evaluations done by the utilization of credible sources by DG Immovable Properties. Another major reason behind its establishment was to track foreign real estate companies operating in Pakistan. 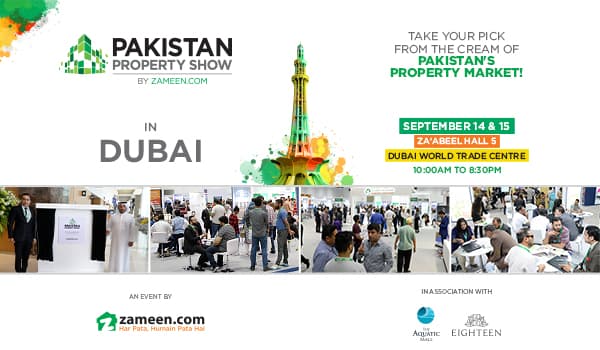 Playing its prominent part in the property sector, Zameen.com, once again, in 2018 brilliantly highlighted the potential of property market of Pakistan in front of the investors living abroad through Pakistan Property Show. It was a successful event covered by many local and international media agencies. A lot of stakeholders and investors mostly from the UAE and other GCC countries visited Pakistan Property Show and showed interest in property investment in Pakistan. The event contained over 60 stalls having property options from all the major cities of Pakistan. It lasted for two days and turned out to be one of the most successful property events of 2018.

After the latest government assumed power in August 2018, it announced a lot of positive developments in favour of the people belonging to the lower-middle class. The launch of Naya Pakistan Housing Scheme is one of those positive developments. What’s more, Prime Minister Imran Khan is receiving a positive response by bidders and various companies belonging to China and UAE. Dozens of bidders have already been offered land for the construction of houses and apartments in different cities of Pakistan.

Withdrawal of the ban on high-rise buildings construction in Karachi

Due to the rapid increase in the construction of high-rise residential projects, the Supreme Court of Pakistan instructed the Sindh Building Control Authority (SCBA) to put a ban on the development of all such projects. It was mainly due to the deteriorating sewerage system of Karachi, which is now a megacity with over 20 million population. However, later on, the court eased some restrictions, allowing the construction of 6-storey structures. Just a couple of months ago, the Supreme Court of Pakistan lifted the ban on high-rises in Karachi, on a condition that the newly constructed high-rise buildings will not, in any case, exceed 26 floors. It was a decision awaited by a lot of property investors and real estate developers who have invested their money in numerous projects across the city.

All in all, 2018 was the year with many important developments in the real estate sector of Pakistan. The authorities took many significant and strict measures to effectively regulate the real estate sector. The property market of Pakistan remained stable and saw a slight increase in its overall value when the new government came into power. Pakistan Property Show also turned to be another successful event that effectively created a platform of global exposure for the country’s property market. Plus, now we will soon see the construction of high-rise buildings in Karachi as the ban on these structures has been lifted by the Supreme Court.

YM
A curious mind and a passionate writer. YM loves to read, write, play XBOX and watch horror movies. He is also a social media buff and tries to stay updated on everything happening around the world!

All You Need To Know About Construction Materials Used in Pakistan

Which Cities In Punjab Are Seeing The Most Rapid Real Estate Development?

All About Investing in La Casa One Mall & Residencia, Karachi