The minister revealed the information while addressing the launch ceremony of the Phase-II of the Hazrat Awais Qarni Township. He added that the KP government would also construct a new 132KV grid station to resolve the long-standing issues of power outages and low voltage in the rural areas.

Afridi revealed that the Minister for Power Umer Ayub would visit Kohat to launch the new grid station project. Currently, the district was receiving its power supply from Peshawar and Domel, but with the new grid station, Kohat will have the ability to supply power to other areas, he added.

The motorway project is expected to cut down travel time between Kohat and Pindi from three hours, to one and half hours. Meanwhile, the minster will hold talks with the KP chief minister to ask for funds to build the new hospital. He will also discuss matters with Railways Minister Sheikh Rasheed Ahmed to resolve the passenger issues related to the new railcar service, which is due to old engines and bogies.

The minister revealed that projects costing a sum of PKR 100 million were in the pipeline.

Afridi said that the provincial government would acquire land for the grid station, hospital, engineering university, and two oil refineries in either Chambai, Jarma, Shahpur, Gandial, or Surgul. He added that they would build a new hospital between Shahpur and Jarma. 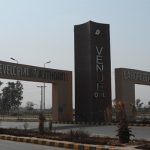